Welcome to my stop on the No-Good Nine blog tour! I am super stoked to be a part of this blog tour. I love a good middle grade book and one about Christmas at that! 😛 Continue reading to see my review for this book, more about the book, and a little about the author.

The No-Good Nine by John Bemelmans Marciano
4 out of 5 stars.

“They’re mad, they’re bad, and they’re about to ruin Christmas!”

Book Description: No kids get coal in their stocking these days. Do you know why? It’s thanks to The No-Good Nine! Pittsburgh, 1931. When Peter awakens on Christmas morning to find his stocking full of coal, he is outraged. After he finds the Naughty List, which contains the names of some other children who received no gifts, he decides they should band together and journey to Santa’s workshop to plead their case, as well as play with the toys intended for the Nice children. The ragtag band of misfits sets out on a series of wild misadventures as they travel by train, truck, dog sled, and boat, encountering thieves and bootleggers, in order to reach the renowned Toy Factory only to accidentally burn it down. More slapstick capers follow before the No-Good Nine extricate themselves and set out to find their next great adventure.

I was sent a copy of The No-Good Nine by the publisher in exchange for an honest review. Release date: October 16, 2018.

I had a lot of fun reading The No-Good Nine. It’s a middle grade book, but it was still a lot of fun to read even as an adult. There was a funny cast of characters like the Liar, the Brat, the Cruel, and so many more! The No-Good Nine go on a crazy adventure to get to the North Pole to confront Santa about being on the naughty list and receiving coal for Christmas and to play with all the toys that are meant for the nice kids.

There so are many crazy things that happen along the way, which make it all the more fun to read. There were a few things that happened that I questioned, but would most likely be overlooked by a middle grader, since this book is mostly intended for that audience. They didn’t take away from the story or anything, so it was still pretty great. There were so many laugh out loud moments and I flew through it pretty quickly. It’s perfect to read around Christmas time.

Overall, I really enjoyed The No-Good Nine. I thought the adventure aspect was a lot of fun even with some things being a little out there. For a kid though, I think they’ll get a kick out of it. I liked that there were a lot of funny moments and the cast of characters made the story even better. I plan to pass this book along to my nephew, because I think he would really get like it. It’s releasing on October 16th (next week), so be on the look out for it! 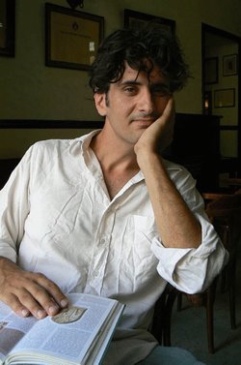 John Bemelmans Marciano collaborated with Sophie Blackall on the middle-grade novel The Nine Lives of Alexander Baddenfield as well as on the Witches of Benevento series. Continuing his grandfather’s legacy, John wrote and illustrated Madeline at the White House, Madeline and the Old House in Paris, Madeline and the Cats of Rome, and Madeline Says Merci.

Leave a Reply to Alicia @ A Kernel of Nonsense Cancel reply