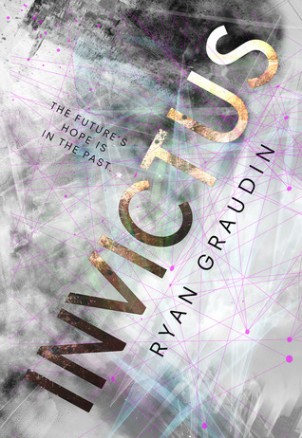 Invictus by Ryan Graudin
3 out of 5 stars

Goodreads Description: Farway Gaius McCarthy was born outside of time. The son of a time-traveling Recorder from 2354 AD and a gladiator living in Rome in 95 AD, Far’s birth defies the laws of nature. Exploring history himself is all he’s ever wanted, and after failing his final time-traveling exam, Far takes a position commanding a ship with a crew of his friends as part of a black market operation to steal valuables from the past.  But during a heist on the sinking Titanic, Far meets a mysterious girl who always seems to be one step ahead of him. Armed with knowledge that will bring Far’s very existence into question, she will lead Far and his team on a race through time to discover a frightening truth: History is not as steady as it seems.

I originally received Invictus from The Novl and from Netgalley in exchange for an honest review. I didn’t get around to finishing it last year (more later), but I decided to check out the audiobook from my library and finally finish it.

So why did I not finish it last year? Honestly, I just wasn’t in the mood for it. I started to get bored early on and decided I needed a break from it. I didn’t want to force myself to read it when I wasn’t in the mood for it, because it probably would have made me hate it. I set it down and it got lost in the pile. I finally finished it though, so at least there’s that.

Fast forward to this year and I finally finished Invictus! I am not entirely sure what to say in this review, so it may end up being a short one. As you can see, I gave it three out of five stars. The boredom still lingered at the beginning and at some parts throughout the book. I didn’t feel enough excitement. The second half of the book was a little better though and I did enjoy it. There’s a lot more going on and things to get a little excited for. I felt like I didn’t click with the characters as much as I hoped I would. They were likable, but my connection to them just wasn’t that strong. There were some “feels” moments and laugh out loud moments with them. Not enough for my liking though.

Overall, I did enjoy the second half of Invictus a lot more than the first half. While I didn’t love the characters in the story, I did like them. There were some fun moments and a couple interesting twists. I’m sad I didn’t love it as much as I had hoped I would, but I am still glad that I finally picked it up again. This was my first time reading a book by Ryan Graudin, so I wasn’t sure what to expect. It wasn’t a bad story at all and I can see why so many people loved it.

Have you read Invictus? If so, what did you think?

In case you missed it;
WWW Wednesday #49.
Thoughts|| Huntress.