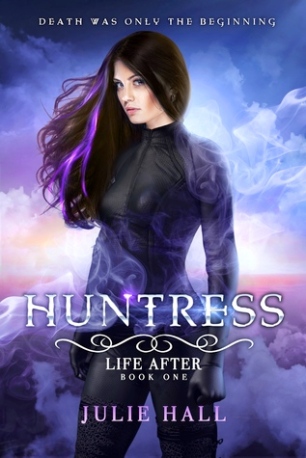 Huntress by Julie Hall
4 out of 5 stars.

“Life, and even the afterlife, is a dance between being prepared and letting go. The wisdom is in knowing how to prepare and when it’s time to let go.”

Goodreads Description: No one’s afterlife is as dispiriting as Audrey’s―at least that’s what she believes after waking up dead without her memories and being promptly assigned to hunt demons for the rest of eternity. She’s convinced God’s made a cosmic mistake; after all, she’d rather discuss the color of her nails than break them on angelic weapons. It doesn’t help that her trainer, Logan, is as infuriating as he is attractive. And just when Audrey and Logan appear close to developing an amicable relationship, a decision made under duress pushes their hearts in a direction neither of them saw coming. Despite her sub-par fighting abilities, an ancient weapon of unparalleled power chooses Audrey as its wielder, attracting the cautious gazes of her fellow hunters and the attention of Satan himself. With Satan’s eyes now fixed on Audrey, a battle for the safety of the living looms in the shadows.

I was sent a copy of Huntress from the author in exchange for an honest review. I was participating in a IG Tour & Giveaway for the final book in Life After series (Dominion), so I was sent copies of the books to read and review as well. There’s still a couple days left for the giveaway (ends April 12th) if you check out my Instagram account (foreverbookish_) or the author Julie Hall’s Instagram account (julieghall). Now onto my thoughts about the first book in the series, Huntress.

As you can see above, I rated it four out of five stars. There were a lot of things I really loved about this book. I enjoyed the characters, the plot, the world building, and it was such a fun book to read. It gave me a lot of Supernatural vibes with the demons, angels, and demon hunters. I was pretty addicted to the story and wanting to know what was going to happen next. There was a lot of information to take in and the first book really set everything up. There wasn’t a whole lot of demon hunting (which was a bit of a disappointment), but understandable since the main character had to train to be a hunter first.

With this story being about angels and demons and having God and Satan thrown it, it became a bit preachy at times; especially certain conversations with God himself. I felt like I was in a bible study class or something, lol. I am not religious at all and I felt like the entire exchange between Audrey and God was so weird. Aside from that, I really enjoyed Huntress. I thought it was a really fun read and trying to figure out what the heck was going on was making me crazy (but in a good way). I plan to continue with the series, because it was actually really good. A lot of things unanswered as well, which I am looking forward to seeing how they play out. I enjoyed it a lot more than I thought I was going to.