I am back to share with you the subscriptions that I get each month. I don’t always get subscription boxes each month, but this month I got two different Nerdy Post boxes. I’ll jump right into them!

Nerdy Post is a fandom based subscription service that sends out hand lettering art and other goodies (bookmarks, pins, magnets, stickers, notepads, posters, etc.) with quotes from the monthly themed fandom.

I am a HUGE Lord of the Rings and the Hobbits fan, so I couldn’t pass up the opportunity to get the April box. 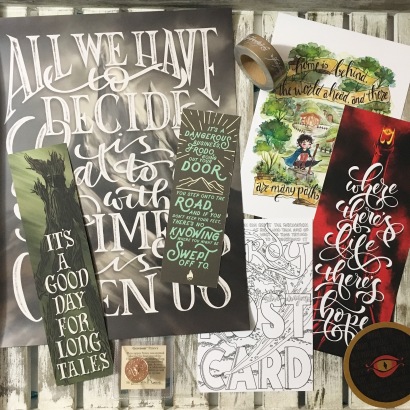 Here are a few close ups of some of the items that were in the box. First picture is the washi tape and coin (currency from that world); I am obsessed with washi tape and the coin is pretty cool. Second picture is the large print; I am a little disappointed with the print because she’s done better prints and this one kind of just looks too plain for me compared to past ones she’s done. I love the quote on it though. Third picture is the large bookmark; it’s double sided and that’s both sides. Last picture is the small bookmark; that was double sided as well and I am obsessed with the quotes on it. Overall, I am pretty happy about about this box.

Alexis (creator of Nerdy Post) was having a one-time box this month as well that included a signed copy of her book, so I got that one too. Her book sounds really good, so I am excited to have it. She designed the entire book cover, which is really cool. 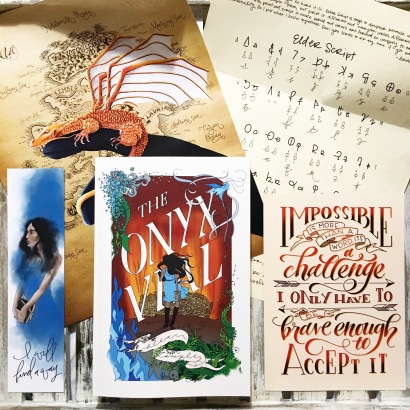 All of the things that she designed and created that was included in this box go along with the book. There’s a quote print and a large print. I am obsessed with the large print. I also really like the bookmark. It’s double sided, but I only took a picture of the one side. Oops. Both sides are equally as cool though.

Goodreads Description: Fifteen-year-old Ariana Emory hides a rare and forbidden talent: she creates portals between worlds in the pages of books. These portal books are dangerous. But to Ariana, they are freedom. Her world is one of several ruled by a tyrant king. The books are banned and burned, their creators along with them. She wants nothing more than to keep creating them, so that her fellow countrymen can have means of escape and, if she succeeds, rebellion. Driven by that desire, Ariana disregards the dangers and entangles herself in a rebel society’s plot to regain freedom. Along the way, her fate collides with Hunter Woodworth and Killian Fyrenn, identical twin sons of the king. The king and the rebels are after a deadly weapon, known as the Onyx Vial. The king wants to use it, the rebels want to destroy it. The rebels’ success depends on Ariana partnering with the boys, but they are worlds apart and she is convinced their motives aren’t pure. With the king closing in on the location of the vial, time is running out. Ariana must trust them or uncover their true intentions before it’s too late. The fate of the worlds rest in her hands.

That’s all for this month’s subscriptions. I am currently only subscribed to Nerdy Post actively, but sometimes I skip boxes if I don’t like the theme. Are you subscribed to any bookish (or non-bookish) subscription boxes?

I’ll have my April book haul posted tomorrow. It’s surprising really small. I did get quite a few ebooks though. I’ll have my April wrap up posted probably on Monday. Hopefully I’ll get another book finished before then.

In case you missed it;
Thoughts|| Bang.
Thoughts|| More Happy Than Not.