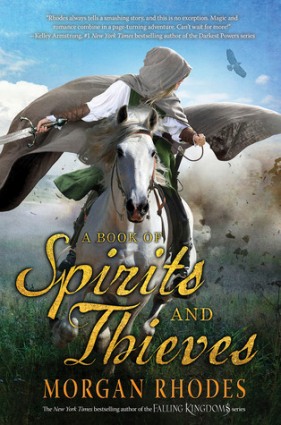 A Book of Spirits and Thieves by Morgan Rhodes
3.5 out of 5 stars.

“My name is Becca Hatcher. I don’t know what’s happened to me, where I am, or how I got here, but I know one thing. You’re going to help me get back home.”

Goodreads Description: Crystal Hatcher, Modern-day Toronto: It’s a normal afternoon in her mother’s antique bookshop when Crys witnesses the unthinkable: her little sister Becca collapses into a coma after becoming mesmerized by a mysterious book written in an unrecognizable language. Maddox Corso, Ancient Mytica: Maddox Corso doesn’t think much of it when he spots an unfamiliar girl in his small village. Until, that is, he realizes that she is a spirit, and he is the only one who can see or hear her. Her name is Becca Hatcher, and she needs Maddox to help get her home. Farrell Grayson, Modern-day Toronto: Rich and aimless Farrell Grayson is thrilled when the mysterious leader of the ultra-secret Hawkspear Society invites him into the fold. But when he learns exactly what he has to do to prove himself, Farrell starts to question everything he thought he knew about family, loyalty, and himself….Fate has brought these young people together, but ancient magic threatens to rip them apart.

Aside from that though, it was still a good book. I still enjoyed it for the most part and I loved the tie in of Ancient Mytica and Modern-day. Becca slips into a comma and her spirit is sent to Mytica. In this book it switches between both worlds. It was nice to learn more about the world and the elemental magic that you see in the Falling Kingdoms series. I didn’t connect too much with the characters in this book, but I am hoping that changes in book two.

Overall, I did enjoy A Book of Spirits and Thieves, but at times it was a little boring for me. I would have hoped to connect with the characters more, but the story was still interesting and enjoyable. I love the way that Morgan Rhodes writes and she’s definitely on the top of the list of favorite authors. I think that me thinking about Falling Kingdoms did play a big part into why I didn’t enjoy it as much as I could have. My mind just seemed to wander so much back to that series. I did like this one enough to want to read the next book though and I believe it gets released this month!

Have you read this book? If so, what did you think?

3 thoughts on “Thoughts||A Book of Spirits and Thieves.”