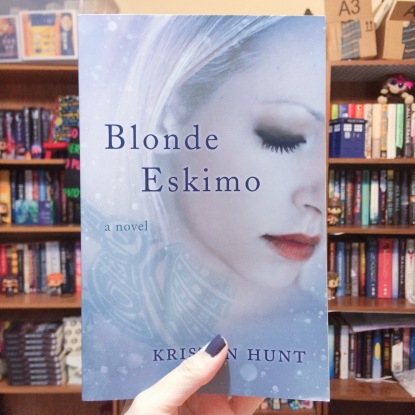 Blonde Eskimo by Kristen Hunt
3.5 out of 5 stars.

Goodreads Description: Part Viking, part Eskimo, Neiva Ellis knew her family’s ancestral home, the island of Spirit, Alaska, held a secret. A mystery so sensitive everyone, including her beloved grandmother, was keeping it from her. When Neiva is sent to stay on the island while her parents tour Europe she sets out on a mission to uncover the truth, but she was not prepared for what laid ahead. On the night of her seventeenth birthday, the Eskimo rite of passage, Neiva is mysteriously catapulted into another world full of mystical creatures, ancient traditions, and a masked stranger who awakens feelings deep within her heart. Along with her best friends Nate, Viv and Breezy, she uncovers the truth behind the town of Spirit and about her own heritage. When an evil force threatens those closest to her, Neiva will stop at nothing to defend her family and friends. Eskimo traditions and legends become real as two worlds merge together to fight a force so ancient and evil it could destroy not only Spirit but the rest of humanity.

I was able to meet and hangout with Kristen Hunt last weekend and it was so much fun. Kristen is so nice and so fun! I really had a lot of fun talking to her and hanging out over that weekend. I wanted to read her book before California, so I picked up a copy of Blonde Eskimo and read it the week before I left for California.

Blonde Eskimo was a pretty good book and I enjoyed the story. I thought it was so cool learning about Eskimos, their heritage, legends, and traditions. I liked Neiva, but at times she was hard to connect to. She had some amazing friends in the book and I wish I could have connected better with them too. There is also a guy named Darius that I pretty much fell in love with. It was more about Neiva though, so you don’t get a whole lot of the other characters. Neiva and her friends go on this adventure to discover the secrets of Spirit.

The Spirit world was really interesting and there were tons of secrets. This book was good, but it was lacking a lot of action. It was mostly explaining the world and what was going on with Neiva. Neiva is clueless about Spirit and has no idea what anything is and what is going on around her and happening to her. So Blonde Eskimo was mostly just Neiva learning about the world. That was fun to read, because the world itself is really interesting.

I rated it 3.5 stars because I would have liked a lot more action and adventure. When there were action scenes, I felt like the characters got rescued too quickly and like they weren’t in any real danger to begin with. I do honestly believe though that the next book in the series will be pretty awesome, because this book really sets up the second book. There are still a lot of pieces to the puzzle missing, but I think the next book will fill in a lot of those pieces and do it in a really awesome way. I think now that Neiva knows the majority of what she needs to know about the world (and the reader as well), the next book will have tons more adventure and action and hopefully some real danger.

Overall, this one was a lot more information dropping (mostly a good way) and world building, but it was still good. I love the Eskimo heritage and legends. I loved learning about them, because I knew nothing about it. I just thought Eskimos were people in Alaska that wore fuzzy hoodies and lived in igloos (that’s what I got out of it when I was a kid and I never knew anything else about them). There is so much more to it and them! I enjoyed this book and I do recommend it, especially because I have a feeling the sequel is going to be so awesome.

Have you read Blonde Eskimo? Do you think you’ll be adding it to your TBR?

I hope you have a great day! 🙂