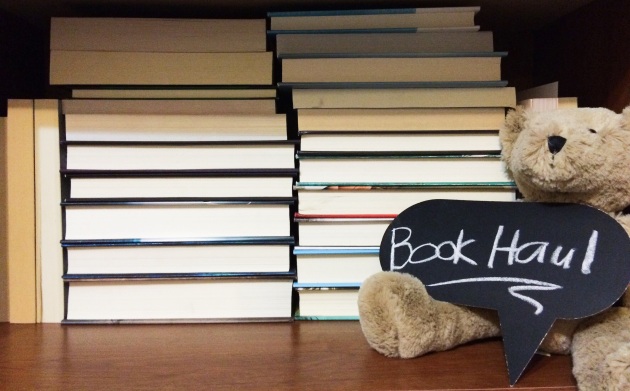 This will be the last month that I go extremely crazy with book buying. It’s really taking a toll on my bank account and honestly, it’s stressing me out so much. I have so many books to read and I feel like it’s never going to end and I’ll never get it under control if I don’t stop buying books! So I may get the occasional book here and there, but no more craziness like you are about to see. And with that, here is my January book haul. 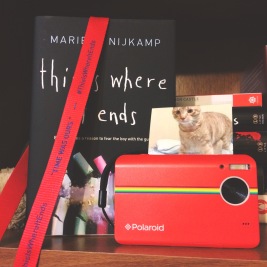 I also won an awesome giveaway for This Is Where It Ends and I won that red Polaroid camera and a red lanyard from Sourcebooks. 😀 The little picture of my cat ColbyJack was printed with the Polaroid camera.

I’ve been dying to get my hands on all of these books, so I had to pick them up when I seen them at Target. 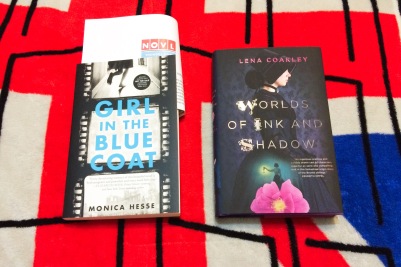 I was sent an ARC of Girl in the Blue Coat from The Novl and I am really excited to read this one. I should be reading it within the next month or so and getting a review up.

I was a little disappointed with the OwlCrate this month and even more so because I didn’t get everything that was supposed to be in the box.

Included was:
Snape Funko
Raven Boys bookmark
Patronus chapstick
Worlds of Ink and Shadow by Lena Coakley *pictured above*
A Knot in the Grain by Robin McKinley ebook

I was supposed to get a Throne of Glass print, but they forgot to include that in my box. Kind of a disappointment since everyone got one in their boxes and I feel like if I paid a lot of money for a box, I should have everything. The box this month wasn’t as great as past boxes, that’s for sure. I just wasn’t thrilled about any of the things included. I do love the Snape Funko, but that’s about it.

Okay, so I went a little bit crazy on Book Outlet and I slightly regret it right now. Most of these were from Boxing Day sale and then I think another sale they had. Most of these books are books I never even heard of, but got them because I felt like I had to buy something during these sales and they sounded interesting. I will NOT be doing that anymore. GOODBYE BOOK OUTLET…unless it’s a book I actually know for sure that I want. Hopefully they’ll be decent reads and I won’t feel so bad about getting them. The first five (first picture) are ones that I did really want then the rest are just random ones.

They All Fall Down by Roxanne St. Claire
The Whisper by Aaron Starmer
Mortal Danger by Ann Aguirre
The Islands at the End of the World by Austin Aslan
Boy21 by Matthew Quick
In a World Just Right by Jen Brooks

Hungry by H.A. Swain
The Weight of Water by Sarah Crossan
Hidden by Helen Frost
The Last Best Days of Summer by Valerie Hobbs
Fixing Delilah by Sarah Ockler
Everybody Sees the Ants by A.S. King
Why We Broke Up by Daniel Handler

I actually didn’t go crazy with buying e-books like I usually do, so at least that is one good thing to come out of this crazy book haul. I’ve been trying to stay away from Amazon and e-book deals as much as possible. I already have over 200 e-books that I need to read.

Darkly Dreaming Dexter by Jeff Lindsay
The Whispers of the Fallen by J.D. Netto
Uninvited by Sophie Jordan
Undertow by Michael Buckley
Need by Joelle Charbonneau

That was my crazy January book haul! I have no idea how it ended up being like this, but I do not plan on ever doing this again, lol…hopefully! I have to save save save money, because I am going to California in March! 😀 I also really need to work more on reading the books that I own rather than continuing to let my book count get even more ridiculous, lol.

I hope you had an awesome weekend! 😀