I am going to do a random update and share pictures! I am at a loss of what kind of post to do right now, so here’s an update about things going on in my life and other little random things; bookish and non-bookish.

I am so stoked that some of my favorite shows are back! I love TV as much as I love books and I have TONS of favorite TV shows.

Doctor Who.
So far I am really loving this new season. I am so happy with Peter Capaldi as the Doctor and even more this season. He’s definitely one of my favorites! This season already has me teary eyed and “OMG” and its only been three episodes! THE FEELS this show gives you is insane.

Once Upon a Time.
I am glad OUAT is back! It seems like this season will be pretty interesting with Emma being the Dark One now. I’ve only watched the first episode in the season, so I’m one episode behind. I am kind of annoyed about every new season being where everyone loses their memories though.

Sleepy Hallow.
Yesssssss! I am so so so excited that Sleepy Hallow is back! I haven’t been able to watch the first episode in the season yet, but I plan to this week once the next new one records Thursday. I’ve been having major Ichabod Crane withdrawals. The boyfriend has long hair and sometimes grows his beard out, so it was to the point that I told him he should start dressing like Ichabod. 😛 Let me just point out how good looking Ichabod Crane is though…

CAN I HAVE HIM, PLEASE?!

Supernatural.
My boys are back tomorrow and I couldn’t be happier! Season ten ended pretty crazy and the trailer for season eleven was SO INTENSE! I can finally stop bugging the boyfriend with telling him how much I miss Supernatural, lol. I’m sure he got annoyed with telling me repeatedly that Sam, Dean, and Castiel would be back.

I’ve had my Supernatural bookmarks to hold me over though 😛
I used Castiel when I was reading Siege and Storm this month.

I recently finished HP and the Deathly Hallows and OMG am I glad I finished at home versus at work. I could not stop crying (I cried a couple times at work), especially when Harry named his kids after Snape, Dumbledore, and his parents. GEEZ! I don’t know if I can handle seeing the movie, lol.

I am currently reading The Dead House. I heard so many amazing things about it, but in my opinion, it’s not amazing. In fact, I’m finding it quite boring. I’m halfway through and it’s such a drag so far. I took a break from it to read one of the stories in Slasher Girls & Monster Boys. The first story in Slasher Girls was pretty interesting; I am really excited about the story from Leigh Bardugo though! 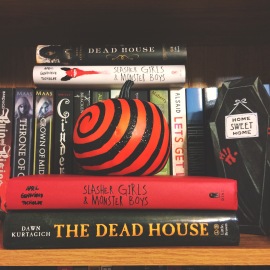 I finished the Don’t Stay Up Late audiobook from R.L. Stine yesterday and that was good. It wasn’t fantastic, but it was good. I was looking for some Halloweenish audiobooks to listen to throughout this month as well. I also recently finished Siege and Storm, but honestly, Shadow and Bone was SOOOO much better!

I have some awesome preorders coming today and I am sure a lot of you have these coming! I think these will be the extent of my book buying in October. I will be sharing once I receive them, of course!

My dog Dax as you know was really sick, but he seems to be getting better. For a little while we thought he wasn’t getting better, because he wouldn’t eat again. He’s eating now and doing fine. Hopefully he stays okay.

Things have been kind of rough for the boyfriend and I since last month with so many things going on and needing taken care of, like the vet stuff with Dax. Hopefully once we get through October, things will be okay. 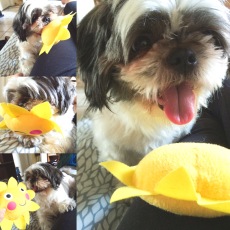 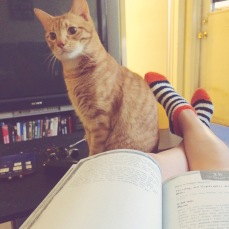 September was the first time in a VERY long time that I actually felt kind of defeated. I usually have a positive outlook on everything and I rarely ever let anything bother or affect me. I am putting all the negative things behind me now though, because I don’t want to dwell on any of that! It’s not what I do and I did for longer than I really should have.

Over the weekend I went out for drinks and lunch with my younger sister. We rarely ever do much together as far as hanging out outside of home. It was actually a pretty good time. She’s only a year and a month (I guess I should say 13 months, lol) younger than I am. She’s one of my best friends, even if we don’t talk about things regularly or hangout regularly..don’t tell her I said that though. 😛

I am a beer girl. And the waitress suckered us into getting dessert. 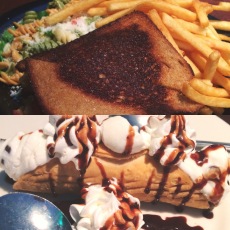 I mentioned in one of my past posts how I ordered some Halloween themed bookmarks to go with my Halloween TBR reads this month and I never posted a picture of them, so here they are! I got these from Craftedvan and HappyHelloArt on Etsy.

Pumpkin, Ghost, and Zombie from Craftedvan.
Sanderson Sisters and Binx (Hocus Pocus) from HappyHelloArt.
Also pictured is a Miss Peregrine’s calendar I received for preordering Library of Souls. 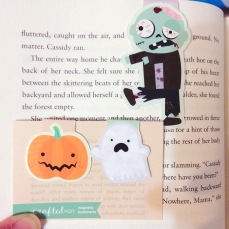 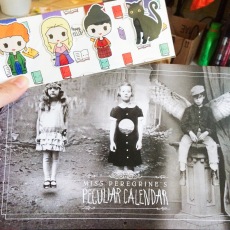 Umm…I think that’s all! I’ll end this post with a couple of other pictures I took. I bug my cat A LOT and I think that’s why he hates me, lol. I also got some cute Halloween decorations recently. SPOOOOOKY! And more pumpkin beer. 🙂

Okay, I am off to work! I hope you guys have an amazing day! I think I may do more posts like this once or twice a month. Let me know what you think about it! BYE! ❤