Hi 🙂 I’ve mentioned this quite a few times, but I am in a book club over on Goodreads called Bloggers’ Book Club with some awesome bloggers. I decided to do small little posts that basically just show you guys the book that we’re reading and how I felt about the book. The book chosen for July was… 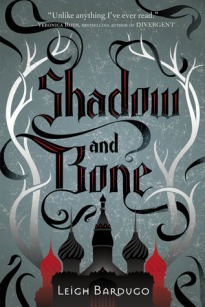 Shadow and Bone by Leigh Bardugo
4.5 OUT OF 5 STARS.

“If I told you I’m trying to save the world, would you believe me?”

I am so glad that this book was chosen for the July read in the book club! I’ve always wanted to read this book, but I know I probably wouldn’t have picked it up anytime soon with how many books I have on my TBR lol! I rated this book a 4.5 out of 5, because well….it totally deserved it! It was such a great book! There were some minor things that did bug me, like I wanted to know more about these monsters in the dark! In the description it talks about them feasting on human flesh and I wanted some of that!! I mean, well, not the human flesh ( 😉 ), but I wanted to read about it! There really wasn’t much that I didn’t like though, so that was awesome!

I felt like Alina was a great character, she was cool, had me laughing at times and just overall an awesome character. I wasn’t annoyed by her or anything like that and that’s always good. I am always finding myself lately with books where the characters just bug me to death! The Darkling was interesting, but I won’t go too much into him. He plays a big role in the book, so I don’t want to accidentally ruin anything. Mal, I am totally in love with Mal! Hands down my new favorite book boy crush.

A few little surprises throughout the book, which made it even more exciting! I love Leigh’s writing style and the way she explained things; so easy to visually see everything in your head. The Grisha, the world, everything was great. Overall, I really enjoyed this book so much. I highly recommend reading this book and I can’t wait to start the next book in the series!

Goodreads Description: Surrounded by enemies, the once-great nation of Ravka has been torn in two by the Shadow Fold, a swath of near impenetrable darkness crawling with monsters who feast on human flesh. Now its fate may rest on the shoulders of one lonely refugee. Alina Starkov has never been good at anything. But when her regiment is attacked on the Fold and her best friend is brutally injured, Alina reveals a dormant power that saves his life—a power that could be the key to setting her war-ravaged country free. Wrenched from everything she knows, Alina is whisked away to the royal court to be trained as a member of the Grisha, the magical elite led by the mysterious Darkling. Yet nothing in this lavish world is what it seems. With darkness looming and an entire kingdom depending on her untamed power, Alina will have to confront the secrets of the Grisha . . . and the secrets of her heart.

Have you read Shadow and Bone? If so, what did you think? If not, do you think you’ll pick it up? Let me know in the comments! And feel free to check out some of my other posts that I’ve recently done linked below!

Friday Finds #25. –  new books I added to my TBR list.
Reading Habits Tag. – a fun tag about my reading habits.
Book Haul Three?. – the last of the books I bought in the month of July.

I am off to go read, of course! Tomorrow I’ll be posting up my July recap and some of my hopes for August, so be on the look out for that! So many awesome books on that list! Bye! ❤