I hope that everyone is having a great weekend! I have done nothing that I planned on doing so far this weekend, oops! I did go shopping for Easter goodies for the niece and nephew and then ended the day with another trip to a different Goodwill. I am totally in a reading slump as you have probably read in the last couple posts I have done, but I am in no way in a not buying books slump..hah. I think I rather be going through that! The trip only ended up being $12 though, so that’s awesome! Onto the books… 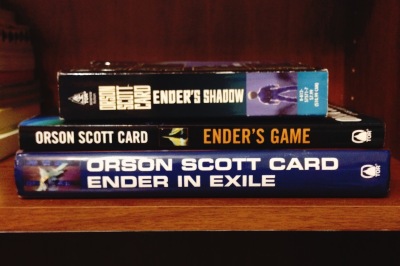 I thought it was totally awesome that I found THREE Ender books! I read Ender’s Game, which I got from the library, but I decided to buy the book so I could own it. I was also so happy that I found some others! I am excited about Ender’s Shadow, because it’s about Bean!

I am pretty excited that I found For One More Day. I love that book so much and I love Mitch Albom. The boyfriend chose The Bourne Deception, but I am sure it’ll sit on the bookcase and never be read by him; just like the others he chose before, lol. My younger sister chose Reality Check, but I think I might read it also. Allies & Assassins I seen last month or so when I went there and was on the fence about getting it, so I didn’t get it. I seen it again this time, so I decided to just get it. All the books together 🙂 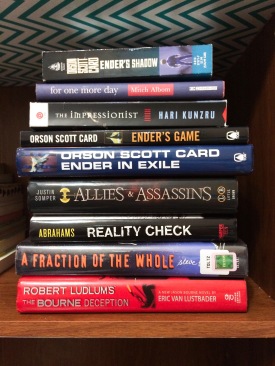 Tomorrow I have to get some work done. I brought home work from my job to do over the weekend, so I have to get that done tomorrow. I also did not accomplish any Dorothy read time in today, so I have to try to tonight and also tomorrow. I am really trying to make it a point to finish it before April 1st! Blehhhh. I love the book, but I am in a slight reading slump…so there’s that. Nothing at all against the book. Tomorrow will be busy. I also have another book club chat about The Glass Arrow tomorrow, so I have to get my work done, so I can join that.

Throne of Glass came in the mail yesterday and I am excited about it! It’s the book chosen for the April read in the book club, so that’s awesome. I love this version of the cover. And that’s me trying to read Dorothy Must Die last night, but the reading slump totally took over, blehhhhh. I also look insanely tired, because for some reason the last month or so I haven’t been able to get to sleep early enough during the week. Oh well!

Just in case you missed them, here are a few of the last posts that I did and sorry for the repeat in linking from other posts, but I haven’t done that many posts recently. Hopefully that changes SOON!

Okay..that’s all for now. I am off to MAYBE read or catch up on Broadchurch with the boyfriend. I love David Tennant so much and Broadchurch is amazing! We are two episodes behind on the new season. 🙂 BYE!

7 thoughts on “Another book haul, yikes!”